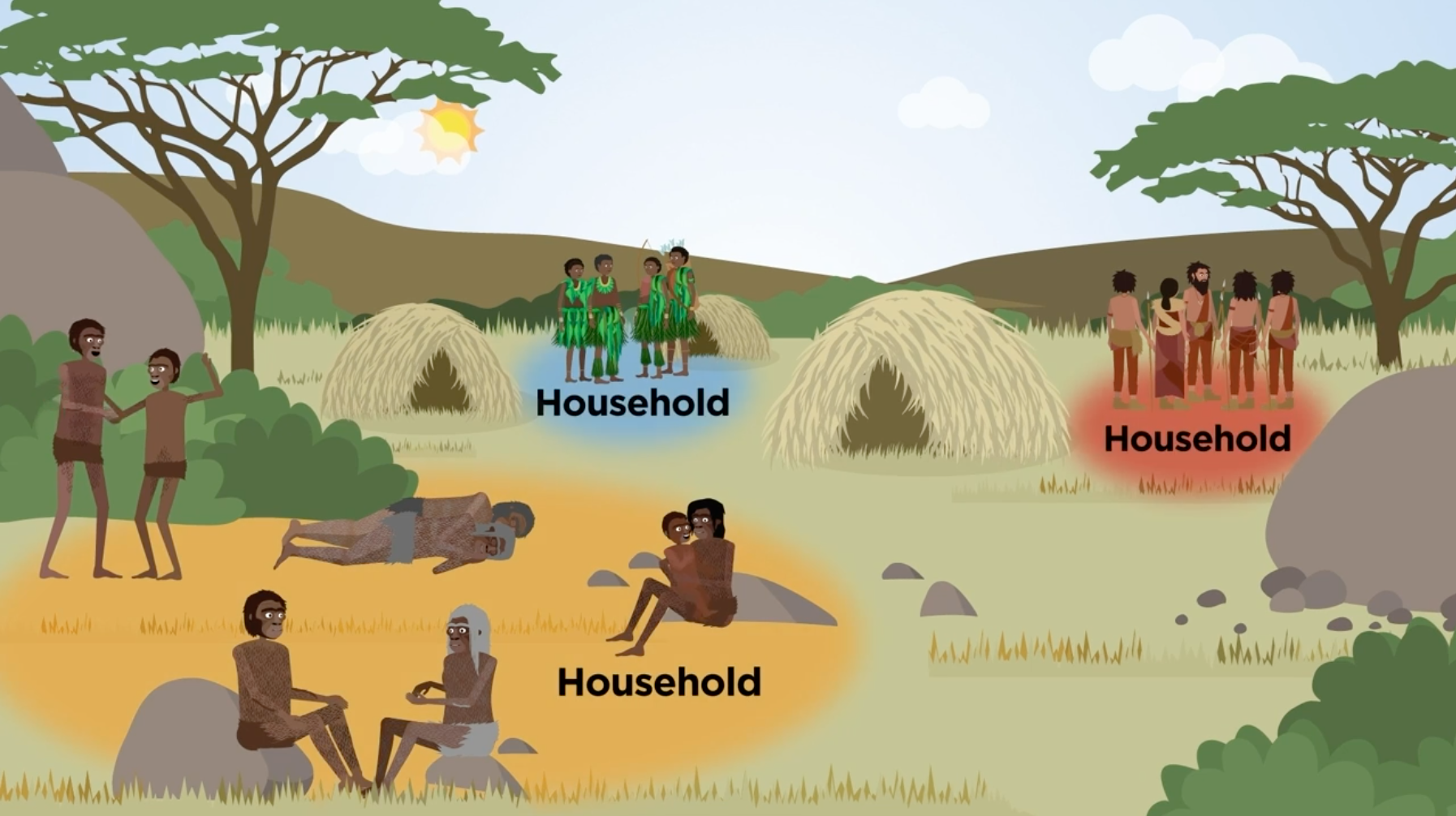 How Have Processes of Evolution Changed Households?

Populations of Homo sapiens had spread across Africa by 330,000 years ago. Members of our species shared big brains that facilitated close interactions among networks of friends; they nurtured their offspring for years until puberty. Human networks ranged from households of about five members to communities of 150 members that protected the group. Households, mostly led by male-female pairs, provided food, sleep, repose, and nurtured offspring.

Biological evolution, through a process known as “natural selection,” brought gradual change to plants and animals. One evolutionary step was the appearance of Homo sapiens—its individuals, households, and communities—as early as 500,000 years ago. Darwin’s detailed theory of natural selection balanced three dimensions of change: variation of biological characteristics, reproduction of each characteristic from generation to generation, and selection in which some innovations survive and others do not.

Through these processes in African environments, networks of Homo sapiens strengthened households and communities, nurturing children who later took up community tasks. Further innovations from biological evolution included new tools, hunting, and mastery of fire. In a mental change known as Merge, two concepts could be combined and then linked to a third. The founding populations spread throughout Africa.

Cultural evolution from 300,000 years ago

The expansion of social learning brought higher levels of cooperation and competition. Households deepened child care and expanded household implements, jewelry, and decorative coloring with ochre. Communities drew on labor from households to create new tools of the Middle Stone Age, including stone tips linked to wooden spears and expanded the use of fire. Communication expanded with dancing, gestures, and networking—but not yet speech.

Social evolution from 70,000 years ago

Social evolution, the formation of conscious and goal-oriented groups, arose rather rapidly about 70,000 years ago. The two principal changes were in the rise of spoken language and in the organized group behavior of other social institutions. In each case, individuals agreed to form and maintain collaborative groups, making decisions within them that relied on huge amounts of individual learning.

New activities and goals of speaking communities included teaching language widely, marriages among households identified by name, creative representation in art and religion, and finely crafted Late Stone Age tools. Households took on the instruction of infants in speaking. Communities of 150, each with a language, migrated to settle the earth. With time, communities joined to create larger-scale societies, requiring still more labor from households.

With the rise of agriculture, households and communities divided up the productive tasks. In a resulting adjustment to expand the labor force, children came to be born with closer spacing. Societies developed new institutions for ceramics, metallurgy, religion, military, states, writing, and schools. Towns arose and some languages became widely spoken. Monasteries and military barracks replaced households for those who lived in them. Slavery changed households, as females headed slave households but free males owned the children. Most recently, working at home due to COVID-19 has transformed households. Still, households sustain themselves.

Human households and communities have evolved greatly, influenced by three regimes of evolutionary change. The changes have facilitated cooperation in humans but can also bring conflict. Biological evolution, through unconscious genetic change, adjusts human bodies and minds to their surroundings. Cultural evolution, through social learning in individual brains (with support from genetic and developmental change), builds new skills. Social evolution adds self-conscious, group-level decisions in language and institutions, to achieve chosen objectives. Communities became societies, which have expanded in laboring, invention, and change. Households adjusted to the changes, providing the comforts and labors of home and, especially, nurturing the children.