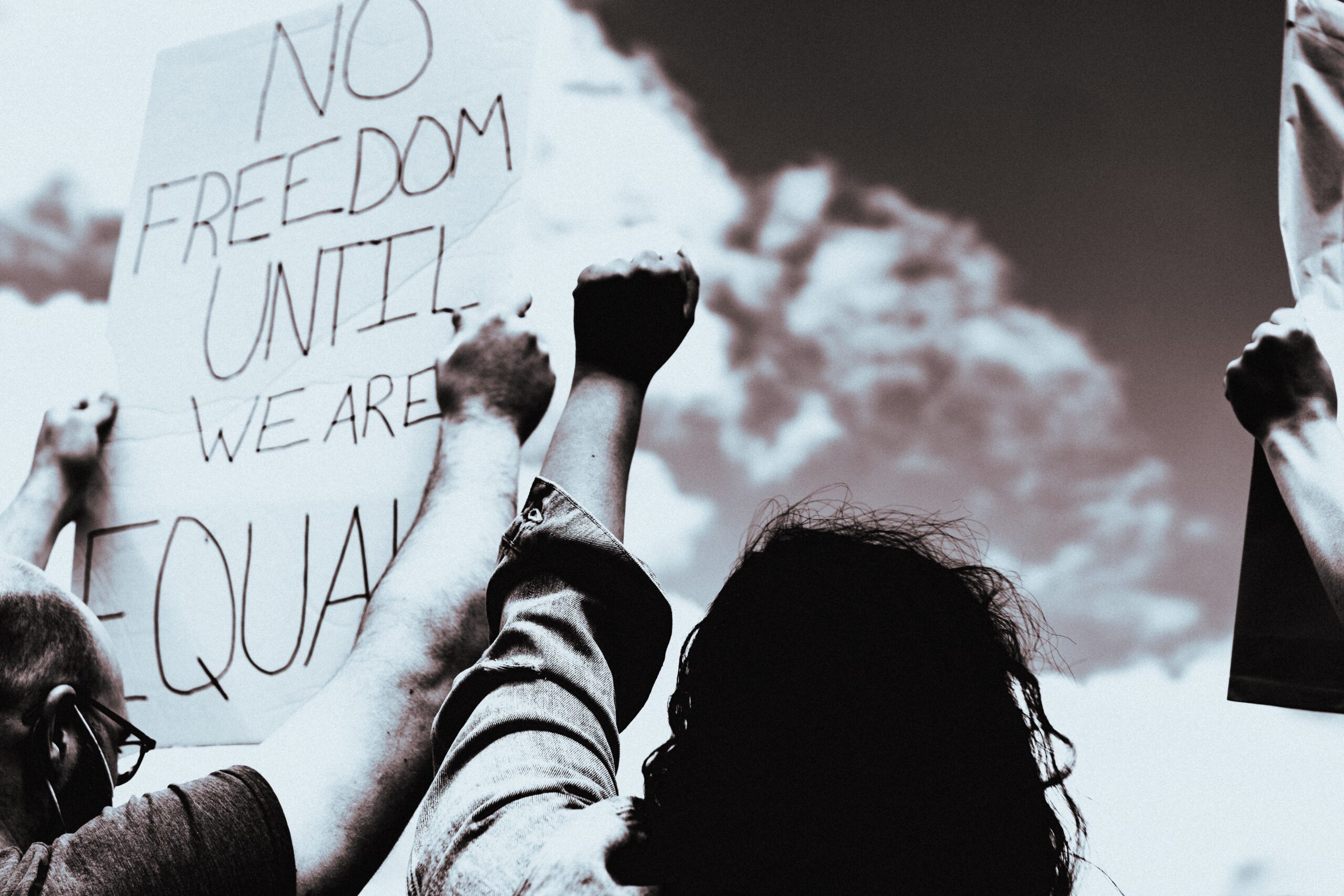 In Pursuit of Freedom

Two waves of U.S. public demonstrations in 2020 raised contrasting demands for “freedom.” In May and June, Americans took to the streets to protest police killings of Black citizens, as well as the high levels of COVID-19 infections among Black Americans. They called for freedom from both police violence and medical neglect. As coronavirus infections continued to rise, other demonstrators—mostly White, suburban individuals, often uniformed in MAGA hats—also demanded freedom. More precisely, they demanded freedom from government-imposed restrictions to mitigate the spread of COVID-19, such as mask mandates, business closures, and crowd limits. At times, these two groups clashed.

Freedom, especially an individual’s freedom to express oneself without restriction, remains a cherished American value. On its surface, the concept may seem simple, but it is complex. This complexity is demonstrated by the starkly opposing beliefs of Black Lives Matter protestors and anti-mask protestors. How is it that both groups wave banners calling for freedom? How is it that one group’s or individual’s freedom so often collides with another’s?

We live our lives not only as individuals, but also in social groups defined by ethnicity, religion, and region. As adults, Americans often find themselves in communities based on ancestry—White, Black, Brown, Asian, and Native American—with their own claims for freedom based on separate yet overlapping histories.

In addition to groups, individuals work and live within society’s institutions. These institutions carry out economic and social tasks; they are governments, factories, hospitals, schools, and police forces. And just as individuals and groups claim freedom, so do institutions. For example, they may seek to impose rules and regulations, set their own prices, minimize their tax payments, or support certain social priorities. Within these institutions, individual employees and managers perform specific tasks to promote institutional freedoms, often at the direction of an individual CEO. Institutions also compete with each other for prominence, profit, and clients, leading to debates over the freedoms of institutions, their employees, and their clients.

Highlighting these complexities does not tell us how to resolve the conflicting freedoms called for by Black Lives Matter demonstrators and by those who wear MAGA hats. But they suggest that what’s at the heart of such ferocious debates over social priorities is more than a simple polarity of liberal vs. conservative.

Understanding different types of freedom was articulated most memorably by President Franklin Roosevelt in his State of the Union Address to Congress in 1941, as the U.S. neared entry into the slaughter of World War II. Roosevelt sought to inspire Americans with his vision of four freedoms for a postwar world:

In the future days, which we seek to make secure, we look forward to a world founded upon four essential human freedoms.

The statement gained wide praise and provided guidance during the divisions of the Cold War, the political shifts of decolonization, and in future conflicts. And although the postwar era wasn’t a smooth expansion of freedom, Roosevelt’s vision served to uphold the core value of freedom.

Additionally, the four freedoms opened a space for exploring the subtleties within the concept of freedom. Each essential freedom interacts with the others, complicating what it truly means to live freely. For example, while freedoms of speech and belief protect expression by any individual, the acts of one affect the lives of others. No single freedom is absolute, so there must be a discourse on all four freedoms among individuals.

Further, it helps to consider how Roosevelt’s four types of freedoms interact with the three scales of freedom. Spreading freedom throughout a society requires attention to different kinds of freedom at the individual, group, and institutional level. Only then can society begin to find ways to limit both conscious and unconscious instances of unfairness.

Can We Agree on ‘Freedom’?

What, then, would be an appropriate framing of the term “freedom,” both within nations and for the world as a whole? This question is not easily answered, but an essential starting point is applying the basic vision of four freedoms at the individual scale. Individuals can act out their dreams on their own, in the larger social context of groups and institutions in which they are involved. Yet individuals may also be clamoring for their own freedom to act, or they may be limited by their subservient role within a social group, which is also seeking its freedoms.

And because society’s structure is complex, preserving and protecting individual freedoms also requires imposing limits and boundaries. These include regulations that guide the behavior of all individuals, groups, and institutions in order to create a “free world.” Deciding on these regulations, however, is a perpetual challenge. Although governments are typically the institutions charged with protecting individual freedoms, they also seek to uphold their own institutional freedoms. For instance, as we’ve seen during the pandemic, government-imposed regulations on personal freedoms may at times be required to protect public health and the greater good. But when a government exercises its own freedom, and chooses not to enact such regulations—instead opting to protect its position of power—the results can be disastrous.

To return to our original example, America’s long history of racial discrimination by individuals has seen steady improvements in the individual treatment of people of color. But Black Americans remain persecuted; their freedoms remain limited; and their levels of want and fear persist because of discrimination by institutions that restrict housing, employment, and health care. As such, Black Lives Matter demonstrators continue to demand freedom.

Meanwhile, people identified as White are now divided into two camps: those hoping to gain benefits from a shared diversity by letting go of an old hierarchy, and those fearful that the end of white supremacy will make them inferior. Based on these fears, militias have attacked the government for breaking the social contract that enforced white supremacy. Yet the growing power and profit of large institutions (and their CEOs) is not always viewed as a similar injustice. CEOs have been able to continue practices that produce inequality, lobby governments forcefully, and deny employees their voices.

These realities make clear that freedom, rather than an absolute principle, is a balancing act. Most would agree that all individuals—and the leaders of social groups and institutions—must be free to express their own needs and desires. But just as important, leaders of institutions must join individuals in learning how to value and nurture the freedoms of others.