How did the United Nations originate?

The United Nations (UN) was formally convened in San Francisco in 1945, just after the surrender of Japan ended World War II. Representatives of 51 independent nations signed the UN Charter, which was created rapidly by leaders of the victorious nations. And within just a few years, a remarkable number of UN organizations were assembled, and new treaties were signed.

What organizations comprise the UN?

These are the principal organizations of the UN: 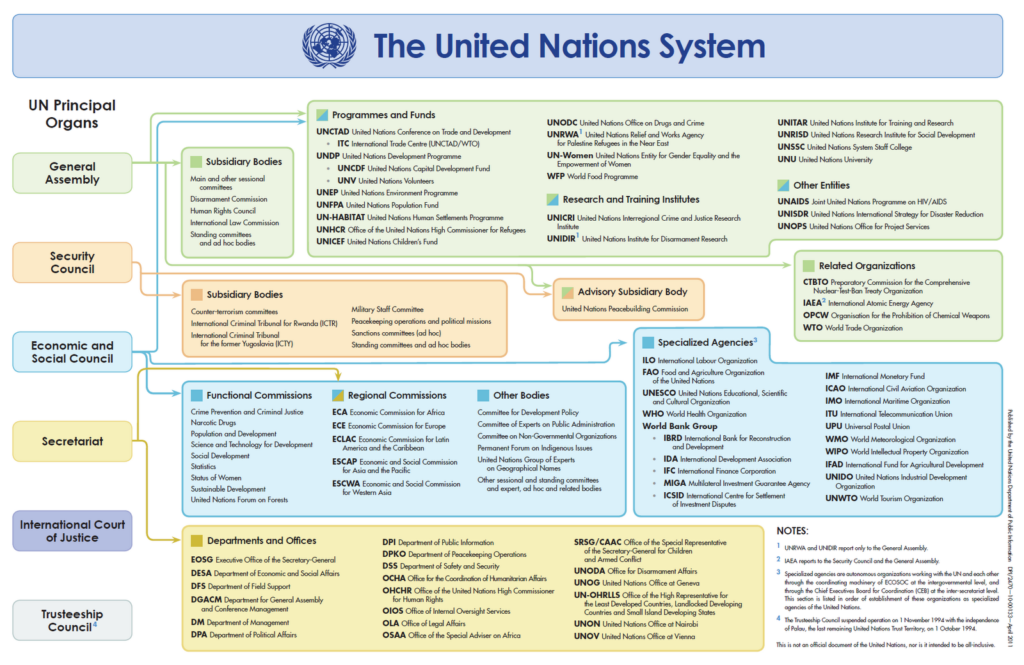 Chart published by the United Nations Department of Global Communications.

How has the UN evolved?

Almost 80 years after its founding, the UN remains constitutionally almost unchanged, though its function has changed dramatically as global ties have become increasingly important.

The GA has grown dramatically, expanding from 51 to 193 members; the SC has remained structurally unchanged except that the governments of China and Russia have changed greatly; and the number of subsidiary organizations has grown with the complexity of international relations.

How is the UN financed?

The UN—headquartered in New York City with regional offices around the world—is financed mainly by contributions from member states, which are determined based on assessments set by the UN. There are also voluntary contributions, as for UNICEF (the Children’s Fund) and the UN Development Program.

What are other important bodies of the UN?

Four well-known UN organizations are UNESCO, WHO, IAEA, and IPCC:

You are invited to explore the United Nations through the exercise described below—on your own, along with others, or with students.

Step 1. Choose two UN organizations from the above chart, The United Nations System. These are the organizations on which you will focus your research.

Step 2. Once you have selected your organizations, conduct an online search to find answers to the following questions:

Step 4. If you wish to submit your results as a comment to the blog, please do so. If several results come in, they will be summarized in a report (but not reproduced).