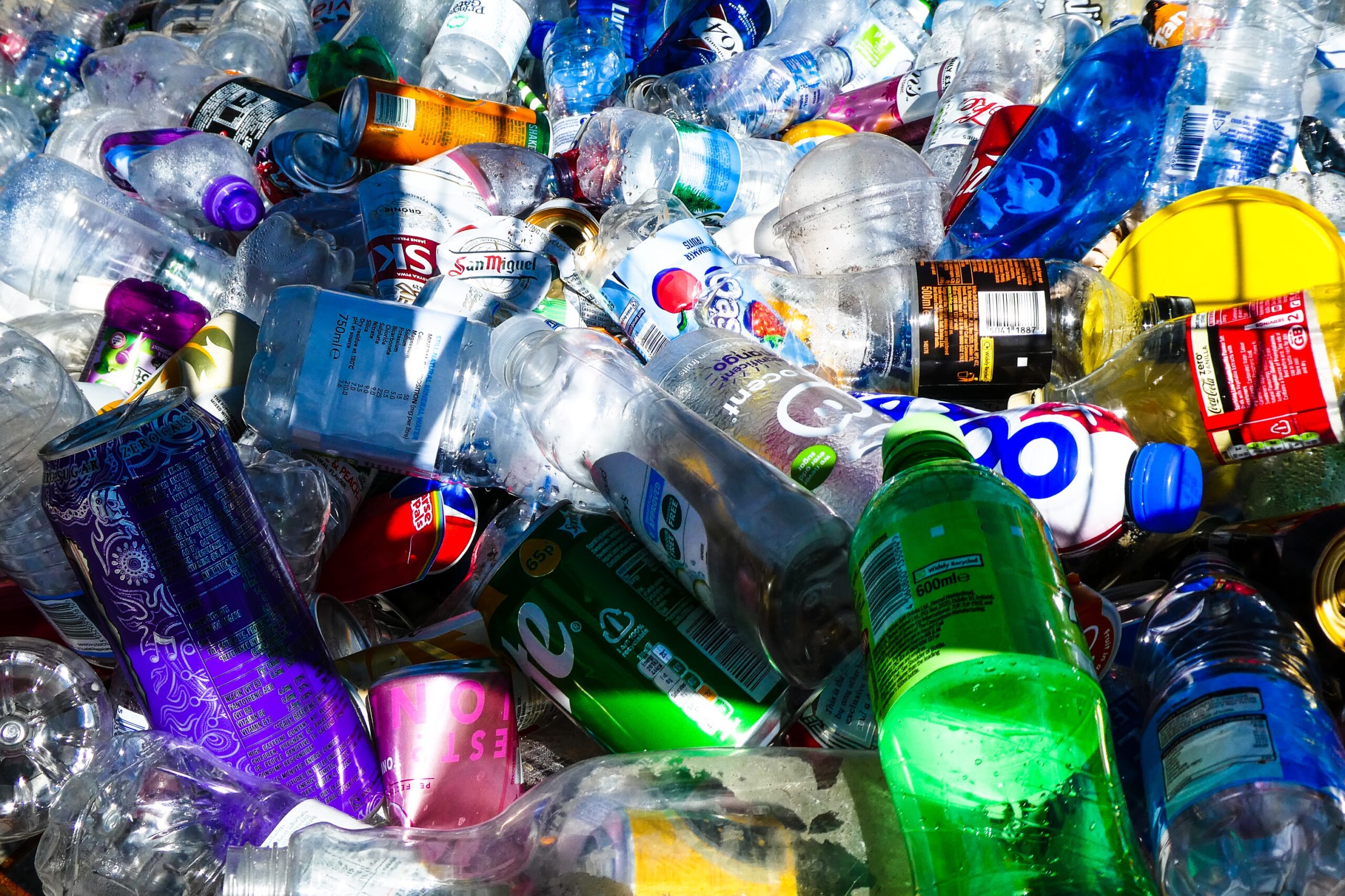 The increased production and accumulation of cardboard, methane, and plastics has frightening environmental consequences, including deforestation, global warming, and the destruction of animal life. But even more alarming is the resulting threat to social welfare caused by such ecological devastation.

For decades, economists, business leaders, and policymakers have proposed economic growth as the antidote to social ills. I argue that—instead of promoting growth alone—a better way to advance social welfare is to redistribute existing resources.

The Severe Costs of Cardboard, Methane, and Plastics

The use of cardboard, both as packing material for intermediate goods and as final goods for consumers, has expanded dramatically. In 2019, the global paper and pulp market was valued at 350 billion U.S. dollars—mostly in carboard, but also in wrapping paper and packaging, newsprint, and printing and writing paper. This uptick in cardboard production is encouraging deforestation. 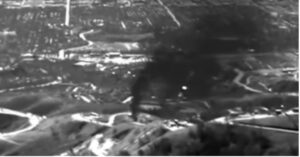 Infrared imaging reveals methane release, invisible to the naked eye, from a petroleum refinery in California.

Methane, a waste product of “fracking” in the production of natural gas, is released rapidly and often secretly into the atmosphere. (Another big source of methane emissions is flatulence from the many domestic animals raised by humans, including one billion cattle worldwide.) Methane emissions cause the retention of solar radiation and increase the atmospheric temperature shows a frightening rate of increase in methane emissions, plus the plans for even more rapid growth in natural gas and methane production. 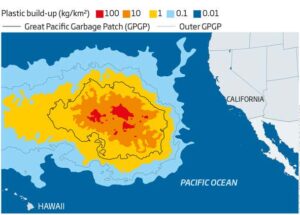 Plastics spread across the earth beginning in the mid-20th century. Because plastics are non-biodegradable, they quickly accumulate as waste wherever they end up. One result of this is the Pacific Garbage Patch, shown here, which contains more than 1.8 trillion pieces of plastic. Source: Lebreton, et al., Scientific Reports

And finally, plastics now pollute the whole world.  These materials—created from petroleum or natural gas and composed of polymers that do not biodegrade—have accumulated in mass amounts. And while the large-scale dumps of plastic on land and sea are frightening, a more serious threat is the likelihood that tiny amounts of plastic are interfering with the effectiveness of sperm cells—for humans and presumably other mammals—thus causing substantial decline in fertility and birth rates.

In sum, the crises of cardboard, methane, and plastic are complex and severe. They each present their own distinct environmental threats, but also interact with one another to bring severe costs to human society and to the Earth as a whole.

What are we to do?

Current State: The Dreams and Dangers of Economic Growth

As the pandemic begins to fade, many are looking forward to a return to economic growth. Economists, corporate CEOs, and political figures tell us that a revived economy is the key to a brighter future. Skilled economists treat growth as a panacea for social ills, claiming it will benefit those who don’t have enough. But these same economists ignore environmental crises that disproportionately affect the world’s poorest.

Similarly, politicians confuse GDP with social welfare, hoping that advertising overall growth will bring them political support even if individual wealth is not rising. CEOs also tell this tale, claiming that their institutions are to be treated as citizens of the world they are destroying. Additionally, CEOs use propaganda to promote their own “corporate responsibility” and falsely claim that the benefits of the cardboard and plastic they produce exceed any costs.

Meanwhile, consumers and households across the globe—in Kenya, for example—are worrying about pollution and their grandchildren’s future. But their power to effect change is mostly limited to their ability to speak as individuals. They lack a clear platform from which to debate the claimed benefits of plastic and cardboard packaging, or to challenge the argument that natural gas is cleaner than petroleum.

Where lies the path forward?

To achieve the social welfare that so many millions are demanding, a more hopeful approach is to focus on redistributing wealth rather than promoting the unlimited growth of unequal economies. We have produced and paid enough in goods and services; it’s time to share more of what is being produced.

The CEOs, of course, will continue to focus principally on their salaries and the profitability of their firms. In 2019 the U.S.-based Business Roundtable claimed that businesses can reform themselves. But 12 years ago, the same business groups claimed that proposals for corporate taxation were “class warfare” and that wealth redistribution was immoral.

Economist Thomas Piketty has shown, however, that wealth redistribution has been historically possible, and the wealthy have experienced both increases and decreases in wealth over time. For example, wealthy nations’ concentration of wealth declined from 1920 to 1950, then rose again starting in the 1970s. 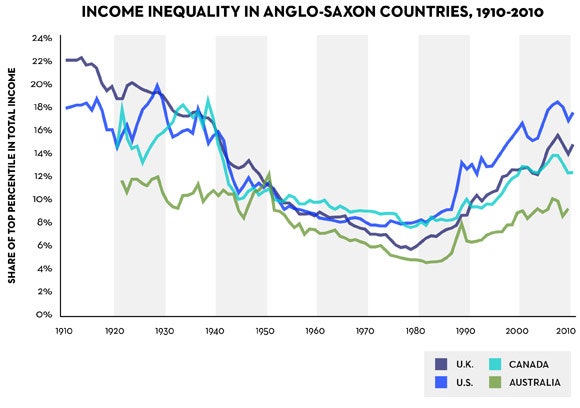 Chart adapted by The New Yorker based on a graphic from Piketty’s book, “Capital in the 21st Century.”

The objective today would be to put economists to work in engineering a gradual redistribution of wealth, combined with an effort to restrict overall growth. But achieving such goals must be taken seriously and explicitly—not only by economists, but also by world leaders, policymakers, and especially the general public. A shift away from growth and toward redistribution would require a coordinated effort across all economic sectors. Two very different approaches are represented in the sharing economy (e.g., Uber, Airbnb) and in the World Social Forum, which meets annually in Brazil.

We can also consider how redistribution could work in a specific industry, such as education. Imagine that it becomes possible to expand education for people throughout the world. For instance, the children of China have advanced greatly in education in the past two decades. What if the children of Africa—roughly equal in number—had the same benefit? Sharing worldwide advances in education with Africans might greatly improve the productivity of a very  large segment of the global population. Then, if the growing educated population were to focus on increasing productivity, they could advance both goals of limiting growth and increasing equality.

Overall, many economic approaches to equality have been proposed. Economist Branko Milanovic supports a reformed capitalism as the best strategy for the future. Alternatively, Kate Raworth, a “renegade” economist, argues for a “doughnut” approach, in which no one is allowed to fall into the hole of insufficient resources or exceed the outer limits of consuming resources. (Amsterdam and other cities have officially adopted her strategy.) And in Milanovic’s review of Raworth’s book, one can see the complexities in these choices.

The truth is, we don’t face a socioeconomic crisis and separately face an ecological crisis. Rather, we face a collection of interdependent crises. From bottom to top, today’s societies need to address the consequences of increased consumption and pollution—along with growing inequality—by supporting environmental research and regulation, and by challenging the endless campaign for economic growth.

While the details of specific policy decisions require deep knowledge by well-informed professionals, the basic strategy of preserving human society must rely on the opinions and priorities of the general human population. For this purpose, every active citizen must be able to think at the aggregate level—as with overall levels of GDP and temperature change. But we must also think at the local level—about how wealth accumulates, how institutions impoverish, and how individual lives are eliminated. It is in the balance of local and global priorities that a strategy for preserving and advancing social welfare can be put to work.